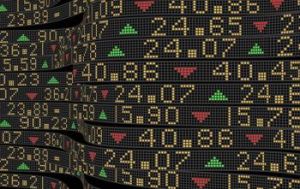 A few days ago, the Dow Jones Industrial Average hit 25,000, setting a new all-time record high for the U.S. stock market. As they are wont to do, the experts are speculating and opining as to what it all means. Some think this is good news, some think it’s bad, some believe it can continue, some believe it’s the boom before the bust.

Does the Dow’s breaking the 25,000 barrier really mean the economy is better than it’s ever been? Does it mean we’re all richer now? Was the market stagnated until Trump came along and breathed life into it, causing us to ascend to new heights of economic ecstasy? Or, could it be that the more things change, the more they stay the same, and that the Dow reaching 15,000, then 20,000, and now 25,000 was inevitable?

Most conservatives will no doubt revel in the current upward trend, taking it as token evidence that Trump and the Republicans are the saviors of the American way of life, single-handedly rescuing the economy from the financial doldrums imposed by eight years of Democrat rule. However, I have a different perspective.

The following graph taken from macrotrends.net shows the performance of the Dow from 1984 through 2017, a third of a century, which should give us a pretty good picture of the long-term trend. 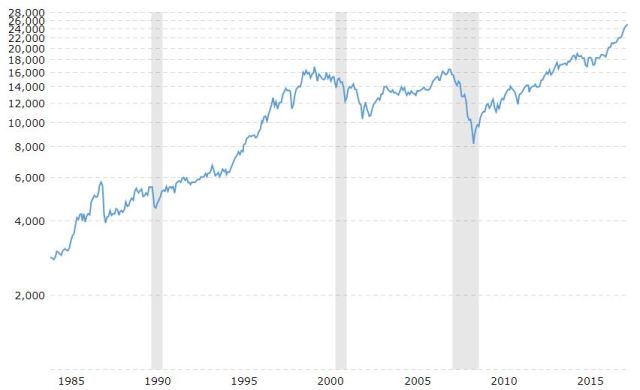 As you can see, if we average out some fluctuations along the way, the long-term trend is upward.

Here’s how the data correspond to Presidential administrations.

Don’t get me wrong, I’m a fan of small government and low taxes. I support any amount of deregulation and lowering of taxes that Trump can give us.

However, I have to temper the dreaded fear that conservatives have of Democrats, believing that all Democratic rule equates to economic apocalypse. I have to also temper the euphoria that some conservatives may be feeling over Trump and the Republican tax plan, believing we have accomplished some unprecedented turn-around in the economy never before achieved by mere mortals. Sorry, but neither the fears or fantasies of conservatives are supported by the numbers.

The Dow didn’t break the 25,000 barrier because of some new and unusual phenomenon. It hit 25,000 because it has been perpetually going up decade after decade and was destined to reach that mark sooner or later. The question is, why does it keep going up?

Let’s take a look at another graph, this time showing the amount of currency in circulation during the same period of 1984-2017. This is taken from the website of the Federal Reserve Bank of St. Louis.

Well, how odd and totally unexpected. It appears as though the money supply has been increasing at a rate that roughly approximates the rise in the Dow. Nevertheless, I’m sure it’s just a coincidence as the six o’clock news certainly would tell us if there were a connection . . . right?

Now let’s look at the purchasing power of the dollar over this same period, once again using a graph from the Federal Reserve Bank of St. Louis website.

Oh my, this graph shows the purchasing power of the dollar steadily going down as the money supply steadily increases and the Dow goes up. But again, if these things were related, I’m sure CNN, Fox, MSNBC and all the others would be telling us about it . . . right?

But the reality is that the money supply, the purchasing power of the dollar, and the stock market are all connected.

The more dollars the Federal Reserve prints and pumps into the system, the less those dollars are worth and the less they buy. As a result, it now takes more dollars to purchase the same items, including stocks, so the total amount of money invested in the stock market naturally increases accordingly. This is called inflation, or more accurately, price inflation, which is caused by the devaluation of the dollar which occurs whenever the money supply is increased above the rate of actual growth in the economy of goods and services.

Another way to look at it is that the privately operated Federal Reserve banking system is fabricating money out of thin air and injecting it into the economy. All that money has to find someplace to go and, all things being equal, a certain percentage of it is going to find its way into the stock market, thus driving stock prices and the market in general up at a rate that corresponds to the rate at which the Fed is printing money.

The Dow hitting 25,000 doesn’t mean the economy is good, nor that it’s bad, it just means there is more money chasing the same goods, services, and stocks, so the price of everything naturally goes up and the stock market naturally goes up too as all ships rise with the tide of inflation in the money supply.

There are of course fluctuations along the way, like the housing bubble of the Clinton-Bush era, but that’s because those dollars the Fed is injecting into the system don’t always get distributed evenly. At any given time, more investors might bet on real estate, oil, gold, tech stocks, etc, thus temporarily increasing or decreasing the percentage of the total money supply that is invested in a particular sector of the market or the market in general. And while government policies can have some effect on whether people choose to invest in the stock market or not, the policy of continuing to print money and inflating the money supply will ensure that over the long term the Dow will continue to go up.

The only way for the Dow not to have eventually hit 25,000 would have been for the Federal Reserve to quit printing money.

I’m sure it’s tempting for Republican apologists to give credit for the current upswing in the market to Trump and the Republican tax plan, but if you want to credit current office holders for the economic conditions during their term in office, then you have to give blame for the recession to Bush and credit for the recovery to Obama. Of course, there is the theory that the wheels of the economy turn slowly and that Clinton caused the Bush-era recession and that Obama benefited from Bush’s policies, in which case, the current hot market under Trump must be credited to Obama.

But I have another theory. Under my theory, if either Democrats or Republicans could control the economy and bring perpetual prosperity, they would, but they can’t, so they don’t. My theory is that when things are good, the party in power takes the credit, but when things are bad, they blame their predecessors.

One thing is certain, whether Democrats are in power or Republicans, the Federal Reserve continues to print money, the purchasing power of the dollar continues to fall, and the stock market continues to rise accordingly because the more things change, the more they stay the same.