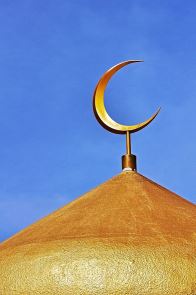 Certainly not all Muslims are terrorists who are going around blowing people up. In fact, many can be said to be living at peace with their non-Muslim neighbors. Some people contend that the problem is with just a few “extremists” who engage in acts of terror. Clearly, that was the view that George W. Bush was promoting when he called Islam “a religion of peace.”

I could work with that premise if there were a sufficient number of Muslims standing up and denouncing jihad and Sharia Law and joining the civilized world in protecting society against the terror, murder and slavery that seem to follow Islam wherever it goes. However, there seems to be a deafening silence emanating from the Muslim community on these matters.

Perhaps some Muslims do oppose jihad and Sharia Law and are silent due to peer pressure, fearing rejection by their fellow Muslims. Perhaps they are silent because they are currently in the minority and are waiting for their numbers to grow before pursuing jihad and Sharia, as seems to happen everywhere that Islam gets a substantial foothold. Whichever the reason for their silence, the question is, “How can anyone seriously ask us to trust, and even accept into our country, adherents to a religion that is consistently accompanied by violence and oppression, and who fail to denounce or take any meaningful stand against such acts?”

In his recent podcast on The Islamic State and What To Do About It, my friend Darrell Castle put it this way: “Let’s say you want to invite ten people to Thanksgiving dinner at your house, but you know that one of the ten is a mass-murdering psychopath. Four of the remaining nine actually agree with the mass murderer, although they will not help him. The last five just remain silent on the subject of mass murder. Would you invite those people into your home?”

The root of the problem with Islam is that there is an evil spirit masquerading as God (Allah in Arabic) and deceiving large numbers of people, telling them to kill and/or subjugate the entire population of the planet on his behalf. If that sounds far fetched, it is not; it’s just biblical. It’s exactly what Paul was talking about in Eph 6:12 when he said, “We do not wrestle against flesh and blood, but against principalities, against powers, against the rulers of the darkness of this age, against spiritual hosts of wickedness in the heavenly places.” One of those principalities that Paul was talking has assumed the role of the Islamic “Allah.” Today the world finds itself wrestling with the people who are under the influence of that spirit.

The ultimate answer to the Islam problem is what Jesus charged us to do: “Go into all the world and preach the gospel to every creature” (Mark 16:15 NKJV), “make disciples of all the nations…teaching them to observe all things that I have commanded you.” (Mat 28:19-20 NKJV) God’s answer is to tell the whole world about His goodness, His greatness, His love, His kindness and His favor toward the entire human race – to bring light to those who are in darkness and set the captives free. However, to the degree that we fail to preach that gospel and make disciples, we find ourselves forced to take up arms to defend ourselves and the free world against the spirit now working through those held captive in the darkness and deception that is Islam.

There is a point at which war becomes necessary and is in keeping with the supreme law of the kingdom, the Law of Love. Though we are to love and have compassion for our fellow man – even those who have been taken captive in the deception of Islam – love for our families, our fellow countrymen and even the rest of the world, compels us to resist and eradicate that which makes itself a threat to their lives and liberty.

Riley J. Hood of the Constitution Party of Wisconsin states, “Muslims commit acts of terrorism because they are Muslims. Terrorism is only one weapon in the Islamic arsenal… Therefore, our ‘War on Terror’ is a farce” (read more here). To declare ourselves to be at war with terror – a weapon – and not Islam, is as fallacious as it would have been to declare WWII a war on Panzers, while ignoring the Nazis who put those tanks in the field and even calling the Nazi Party a party of peace. The reason the current “War on Terror” has gone on for 14 years now, with no end in sight, is because it is tantamount to trying to remove all of the German tanks from the battlefield without ever acknowledging that Nazism is the real enemy that must be attacked, crushed and eradicated.

As with Germany, so with Islam – if the tanks, and today the terrorists, were to remain within their own borders, I would not call for a war of aggression. But neither the tanks nor terrorists remained in their own country.

Also, as with Germany, so with Islam – many people who did not actually agree with the Nazi, or Islamic jihadist views, found themselves caught up in the events simply because they were German, or in this case, Muslim. However, all who did not actively speak out against the Nazis, oppose Hitler, join the resistance or leave the country, became part of the problem if only by being the farmers that grew the food that fed the factory workers that produced the weapons of war. You have to actively oppose evil or you will unavoidably end up giving aid and support to it. There was no middle ground then and there is no middle ground now. In moral matters, there can be no middle ground as even silence becomes consent.

If Islam is indeed a religion of peace as George W. Bush contended, or if even a considerable portion of its adherents actually desire to live at peace in a free and civilized world, then why aren’t they actively denouncing and working to eradicate the sources of terror and oppression themselves? Yes, Muslims are fighting amongst themselves, but only in power struggles, not to stop jihad or end oppressive Sharia Law.

Mr. Hood goes on to contend that any military answer to this problem must address the fact that Islam itself is the threat that the free world faces – a political system seeking global domination and wearing a mask of religion. I actually began writing this piece as a preface to sharing Mr. Hood’s article. I knew that some might call his views extreme, but I have to ask, “If you don’t acknowledge the actual source of a problem, how are you going to fix it? And if you don’t fight and seek to break the back of the actual enemy, then how do you hope to win?” I encourage you to read Mr. Hood’s full article here.

If you’re worried that Islam will succeed, take over the world and kill all the Christians, let me assure you that it won’t. The church will survive until Christ returns. In fact, the church will not only survive, but thrive and fulfill what Jesus declared in Matt 24:14, that “this gospel of the kingdom will be preached in all the world as a witness to all the nations, and then the end will come.” Whether this generation or a future one fulfills that commission, it will be fulfilled. That will require money, travel, access and lots of resources in order for the reality of God and His kingdom to be preached as a witness to “all the nations.” At the Second Coming, all will be without excuse. Every nation will either have accepted Christ or knowingly rejected Him, having had a clear witness of Him.

The current seeming rise of Islam and diminishing of Christian influence here in America is not a token sign of impending doom, the fall of Christianity and the end of the world. At worst, it indicates that the current generation of the church here in America is in spiritual regression and might miss out on the privilege of being used as God’s instrument for some of His exciting Endtime plans, including witnessing the gospel of the kingdom to all the nations.

The Good News of God’s offer of acceptance into His kingdom by grace alone will reach and permeate the whole earth! The only question is, “To what degree will we allow Islam to continue to be a threat to humanity, bringing terror, death and slavery in the meantime?”

If you’re still not sure about the true nature of Islam, I recommend your purchase of this DVD by my friend, former Muslim-turned-born-again Christian minister, Shahram Hadian: Unveiling the True Face of Islam.

Since publishing this article, I have been informed of the Not in My Name social media campaign and a Fatwa against ISIS signed by Indian Muslim clerics. These would appear to be steps in the direction called for in my article, but questions remain, including:

I have a contact who was a member of MARSOC (Marine Special Operations). He worked in four Muslim nations and was trained in their beliefs. Based on his training and experience, he explained to me that:

“Every Muslim supports Jihad. Jihad is not always violent. Its political, social and militant at times. It is political insurgency.

“There are six pillars of Islam that form their exercises or practice if you will. Jihad is number six and is dominant over the other five.

“There are no peaceful Muslims. They are taught to be deceptive by their Clerics. Many of them are however passive. It‘s not the same thing as peaceful.”

The fact that Islam has been spread by violence and conquest for well over a thousand years, engaged in a multitude of forays into Europe during the dark ages and practiced piracy, kidnapping and slavery that necessitated America’s first foreign war (First Barbary War) indicates to me that true Islam, or original Islam, includes violence, subjugation and jihad, both passive and active. It may be that some modern-day Muslims are not devoted to the original form of their religion or its founder and are actually “moderates” who do not seek the subjugation of others to their religious-political system. Nevertheless, it is still unwise to throw open the doors of our country to unvetted immigrants not knowing which ones oppose jihad, which seek passive political jihad and which support violent jihad.

Regarding Muslim refugees, the U.S. does bear responsibility. It was our toppling of regimes that destabilized the region and opened the door for ISIS.